AIT—best known for its groundbreaking work on live entertainment spectaculars, such as the Olympics, Cirque du Soleil productions, and 19 of the top 20 largest grossing concert tours—acquired themed entertainment design company ITEC Entertainment in October 2021. The partnership will enable the two entities to expand the size and scope of their services and capabilities.

With a who’s who roster that includes Taylor Swift, U2, Paul McCartney, and Michael Jackson, TAIT established itself as a go-to production shop for major musical acts. The company capitalized on its success in the rock ’n’ roll world by bringing its skills—such as show automation, rigging, and set fabrication—to live theater, cruise ships, and other markets.

More recently, it has ventured into themed attractions. For example, TAIT helped bring “The Bourne Stuntacular,” the highly sophisticated show that opened in 2020 at Universal Studios Florida, to life. Among its contributions, it provided the automated scenery, hoists, overhead crane, and flying rigs that are featured in the attraction. TAIT’s acquisition of ITEC will enable it to expand into the market.

“We are geeks in theme parks,” says Bill Coan, ITEC’s president and CEO. Throughout its 37-year history, the company has developed showcase projects for industry leaders such as Disney Parks, Parques Reunidos, and SeaWorld Parks & Entertainment. During that time, Coan says that ITEC has honed its ability to deliver “three pillars” at a very high level: creative design and planning, production services, and show and ride technology.

“We have a well-earned knack for understanding how park attractions work,” Coan adds, noting that TAIT will be able to leverage ITEC’s expertise.

For its part, ITEC will have more resources and greater capacity to produce projects at scale. It will also be able to mitigate the higher level of risk that comes with larger projects.

“We can start to think about projects differently than we did when we had to scrape money out of couch cushions to pay for them,” Coan says with a laugh.

According to Sean Reish, vice president of business development for TAIT, the acquisition makes a great deal of sense for both companies—and for the clients they serve.

“It’s a good symbiotic relationship to grow a turnkey business,” he says.

By consolidating departments, such as finances and human resources, to make operations more efficient, Coan says that his management role will diminish. That will give him more time to focus on business development, which is his passion. He looks forward to growing the brand and tackling larger projects. But Coan also admits that after shepherding ITEC for nearly four decades, handing it over comes with a bit of wistfulness.

“It’s complicated, selling a company that you love,” he says. Pointing to his heart, Coan adds, “You can’t quite get it out of here.”

Coming on the heels of its acquisition of ITEC, TAIT announced in March that it was also purchasing Thinkwell Group.

“Thinkwell is an important piece of TAIT’s overall strategy, that began with ITEC Entertainment, to add the best and brightest creative design professionals for major location-based entertainment projects,” says Adam Davis, CEO of the TAIT Group. 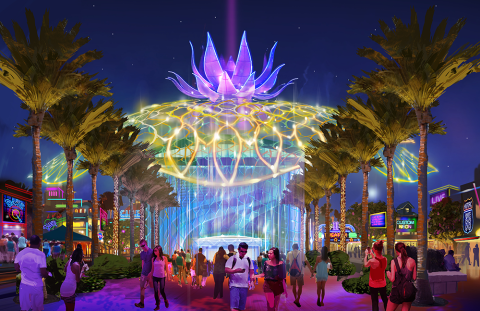