There is no shortage of one-of-a-kind destinations in the Bronx. There’s Yankees Stadium, of course; the New England fishing village-lookalike City Island; authentic Italian food on Arthur Avenue; the biggest park in the city (Pelham Bay at 2,765 acres, leaving Central Park’s 843 in the dust); miles of bike paths; and the country’s only floating pool.

So it should be no surprise that, as the Bronx attracts a wave of development never heretofore seen, the list of attractions will only get more interesting.

While the Bronx lurches towards gentrification at a slower pace than its sister boroughs, it’s already got a sprinkling of breweries, coworking spaces and food halls — it has yet to host a branded WeWork, SoulCycle, or Whole Foods, so there may still be hope.

Just this year, the Bronx welcomed its first independent book store and first rooftop bar. Megadevelopments in Hunts Point, Fordham Landing and Mott Haven are plotting their own specialty tenants, including an arena for professional video gaming and a hip hop museum.

We’ve gathered a list of a few of the exciting, daring and different projects coming to the Bronx.

The Bronx is getting its game on.

The developers of a $3.5 billion development along the Harlem River are planning the city’s first esports arena at their waterfront project near University Heights.

The Connecticut-based Dynamic Star is working with ITEC Entertainment to design a 300,000-square-foot sports and entertainment center at the 40-acre project called Fordham Landing. The esports portion will span 40,000 square feet and accommodate between 2,500 and 3,000 seats, according to information from Dynamic. The Orlando-based ITEC is building a video game-themed amusement park in China.

Dynamic Star felt that the location, which is close to Fordham University and its 80,000-strong student body, as well as a 20-minute train ride from Grand Central Station, made it a perfect fit for an esports destination.

Dynamic Star intends to break ground in 2021 and hopes to capitalize on the booming competitive gaming industry, which already has more ardent followers than professional baseball. While many gaming tournaments are held in traditional stadiums, esports-specific arenas are beginning to pop up throughout the nation. Most notably, in Philadelphia, Comcast division Spectator is spending $50 million to build a 3,500-seat home stadium for the city’s Overwatch team, the Philadelphia Fusion.

The Bronx arena doesn’t yet have a designated team, but Dynamic Star said they’re open to the possibility, should the right opportunity arise.

Everyone knows that the Bronx is the birthplace of hip hop, but what they may not know is that the built environment is what helped create it. That’s according to Mike Ford, a self-described “hip hop architect” and one of the designers of the Universal Hip Hop Museum, scheduled to open in the Bronx in 2023.

Case in point: “The Message” by Grandmaster Flash and the Furious Five is one of the best-known songs in hip hop, and it’s an unsubtle criticism of the housing projects in which the artists grew up:

People pissin’ on the stairs, you know they

Got no money to move out, you know I got

As the incubator of hip hop, the Bronx is the logical place for a museum honoring it. But it hasn’t been an easy journey. Earlier plans for the museum would have put it in the Kingsbridge Armory, the shuttered Bronx Borough Courthouse on Grand Concourse Boulevard, and even Newark, New Jersey.

None of those plans materialized, and it wasn’t until 2017, when the developers of Bronx Point, a megadevelopment in Hunts Point, were looking for a cultural center to anchor their project, that the museum found a home.

The museum will span roughly 55,000 square feet at the project, which is being developed by L+M Development and Type A Architects, located at the foot of the West 145th Street bridge, across from Manhattan.

The opening is scheduled for 2023, to coincide with the 50th anniversary of what some consider to be the origin of hip hop: the day in August 1973 that DJ Kool Herc hosted a “back to school jam” at 1520 Sedgwick Avenue, a Bronx housing project, and introduced the break, changing music forever.

The story of how New York City’s only private island could turn into an eco-resort is a tale of chance encounters.

Alex Schibli can see the rock outcropping known as Rat Island from his home on City Island.

So, in 2011, when he heard that the 2.5-acre island was going up for auction (the owner was retiring to Florida), he put in a winning bid of $176,000. Several weeks later, the 70-something Swiss met Ronald Veit at a card game and brought him in as a 50 percent partner. “He’s from Switzerland also,” Schibli said by way of explanation.

Then, earlier this year, a story about Rat Island caught architect Pablo Jendretzki’s attention. “It was mentioned that the owner eventually, one day, would like to build something,” said Jendretzki, “So I thought, ‘That has to be me!’”

He Googled Schibli’s name, called him, and they met the next day to discuss designs.

The realities of the island (it’s almost all rock, has no access to infrastructure, and reduces in size by 20 percent at high tide) limited the construction possibilities, but Jendretzki soon came up with a design for a self-sustaining eco-resort. In his design, individual, room-sized cabins extend out from the island’s edge, maximizing the amount of island left at the center for yoga, meditation, and relaxation. Energy would come from solar power, and maybe even wind and wave power.

A rash of media attention put Jendretzki’s conceptual idea in front of developers and investors, and there are now five or six lined up to invest, Jendretzki said.

They’re working out the zoning now, which is turning out to be a challenge. Apparently, zoning rules require a 10-foot setback from the lot line, which is designated as the high-tide line, leaving very little of the island available for development.

Asked whether he thinks the plan will come to fruition, Schibli seemed rather amused by the whole escapade. “It was the architect,” he said. “If somebody wants to do it, I wouldn’t mind.”

As for now, Schibli continues to visit his private island, to “just relax, maybe a barbecue and a swim.”

In 2016, the last Barnes & Noble in the Bronx closed, leaving the entire borough without a single book store. Noelle Santos, a Bronx native, decided to do something about it.

Zona de Cuba was started by Fernando Mateo, the former owner of the now-closed Inwood restaurant La Marina and Erol Liguori. La Marina, known as a party spot on the Inwood waterfront, opened in 2012, but filed for bankruptcy in February, saying it owed more than $600,000 in unpaid debts, including more than $220,000 in back rent to the New York City Parks Department. (Lit. Bar and Zona de Cuba did not return CO’s requests for comment.) 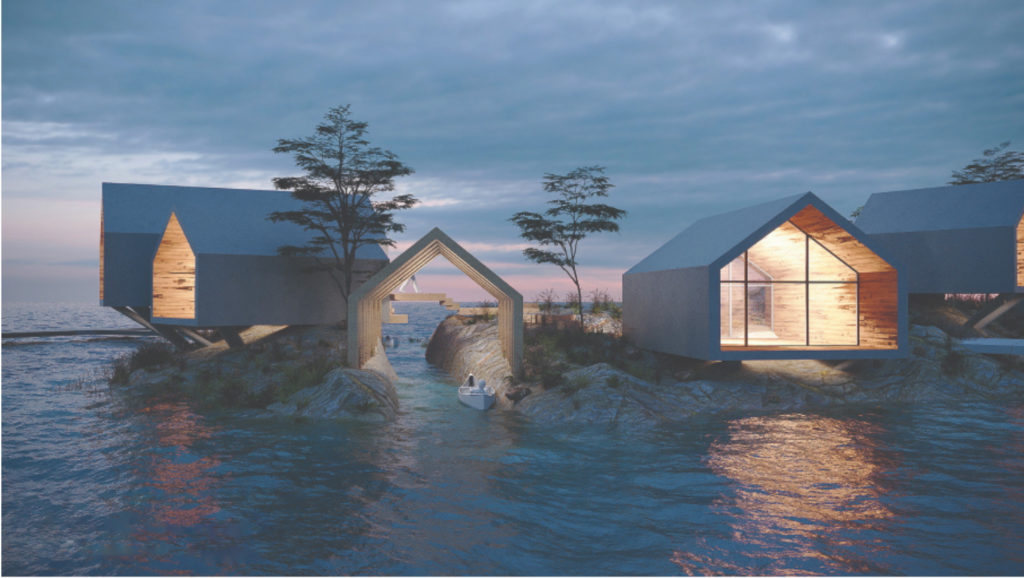