From Dole Whip to Blue Milk: How Disney has used food to elevate its theme parks

In the last two decades, food and beverage offerings have become an increasingly important part of the amusements business.Disney is the one that’s led the charge in delivering innovative and delicious meals, snacks and drinks to parkgoers. Disney has taken this a step further with its new Star Wars Galactic Starcruiser experience.

Thrill-seekers of all ages are excited to return to theme parks, but gravity-defying rides and immersive attractions aren’t the only things they have an appetite for.

In the last two decades, food and beverage offerings have become an increasingly important part of the amusements business. And the Walt Disney Co. is the one that’s led the charge in delivering innovative and delicious meals, snacks and drinks to parkgoers.

For decades, Disney has pushed the boundaries of food and beverage innovation, developing unique park favorites like Mickey Mouse-shaped ice cream bars and pretzels as well as Dole Whips and themed candied apples and cookies.

“Rides and attractions are the number one, then food and beverage are really neck and neck with why people go to the parks,” Dennis Speigel, president of International Theme Parks Services, said. “It’s just a fact. And what parks have seized on in the last 20 years is building their new attractions around areas that offer food and beverage.”

Disney has taken this a step further with its new Star Wars Galactic Starcruiser experience. Unlike its themed lands like Pandora, Galaxy’s Edge and Avenger’s Campus, the Halcyon is a two-day immersive experience. Guests aren’t strolling in for a bite or a drink, they are living a Star Wars story for 48 hours.

That means chef Brian Piasecki and his team had to create an all-inclusive program of food that would be delivered to guests over the course of two days.

Onboard the Halcyon, Disney is showcasing some of its more ambitious and delectable food and beverage creations.

Piasecki worked to create dishes for breakfast, lunch and dinner that were accessible to guests, but also upscale. The lunch buffets, for example, feature familiar dishes, such as grilled cheese and tomato soup, peanut butter and jelly sandwiches, and salads, but with a distinctly Star Wars spin.

The food trays, which are used for the breakfast and lunch buffets, are uniquely shaped with three rectangular depressions so that dishes can slide into place snugly and not move when being carried into the Crown of Corellia Dining Room, the main eating hall onboard the Halcyon. They have a distinct sci-fi aesthetic, but are also incredibly functional, especially for those who want to try a little bit of everything.

“It’s so important to the experience and it’s something that is really under the microscope now in our industry,” Speigel said. “Everybody is looking at ways to improve and that’s quality, service, style, plating, everything. I think that’s going to be with us forever now.”

A History of Innovation

While Disney has long used food design as a way of elevating its traditional fare, it entered a new phase of innovation in 2017 when it launched its theme park land based on the planet Pandora from James Cameron’s film “Avatar.”

With this new land, Disney had the opportunity to create its own cuisine. It wasn’t translating foreign dishes and recreating them at Epcot, it was taking inspiration from a film about an alien planet. Chefs used spices found in Argentinian, Brazilian and Chinese cooking to bring a distinct flavor profile to its food.

“It expands the experience,” said Bill Coan, president and CEO of iTEC Entertainment. “Disney is playing this out and playing it up to advance the visitor experience and at the same time generate incremental revenue.”

Guests tend to be less stringent about their diets while on vacation and will opt to try out menu items that they cannot get anywhere else, Coan said.

At Satu’li Canteen, guests make their own grain bowls, choosing between a base of quinoa and vegetable salad, red and sweet potato hash, mixed whole grain and rice or romaine and kale salad. Then they add either grilled chicken, roasted beef, shrimp or chili-spiced tofu on top as well as a variety of dressing options.

The menu also features “pods,” better known as bao buns. Inside these steamed buns is either a cheeseburger or vegetable curry.

The culinary team also designed unique desserts for the themed land. There is a blueberry cream cheese mouse with passion fruit curd and a chocolate cake with crunchy cookie crumbs and banana cream topping.

Each has been designed to have an out-of-this-world look that is both appetizing and photographable. Instagram has become a place for parkgoers to share their food experience at the parks with others and to get ideas of what they should try in the future.

Pandora also has an array of alcoholic and nonalcoholic drinks available from Pongu Pongu, a themed Tiki bar located near the canteen.

Taste a Galaxy Far, Far Away

Disney continued this innovation when it opened its two Galaxy’s Edge locations, one in Florida and one in California, in 2019.

The main dining location is Docking Bay 7. Here guests can sample the Braised Shaak Roast (beef with pasta) or the Felucian Garden Spread (vegan meatballs with hummus), among other items.

There’s also Ronto Roasters, which is home to the famed Ronto Wrap. It’s a grilled sausage and roasted pork wrap with a spicy slaw. Make sure you have a drink if you decide to bite into this one, it’s got a kick.

If you are in the California park, you can wash it down with a glass of Phattro from the Docking Bay. It’s a play on a half lemonade, half iced tea drink and features a dash of pear juice.

Oga’s Cantina is a place for Star Wars fans to embrace their inner scoundrel. Here, guests can order alcoholic drinks that are both familiar and foreign with names like Fuzzy Tauntaun, Jedi Mind Trick and Bloody Rancor.

Those looking to skip the booze can try out mixed drinks like the Carbon Freeze and the Hyperdrive, which feature fruit juices, popping pearls and dry ice.

Reservations for Oga’s fill up quickly and often purchasable specialty drink mugs are out of stock.

″[Disney] understands that if you do it and you do it right, the theming and the quality of what you are serving, the guests will buy it,” Speigel said.

Additionally, throughout the themed land parkgoers can purchase special bottles of Coca-Cola products. The beverage company worked with Disney to create stylized Coke, Sprite and Dasani bottles that fit into the world of Batuu. The sodas are reminiscent of thermal detonators from the Star Wars films and feature the name of each brand in Aurebesh, the fictional language of Star Wars.

Down to Earth Food

For Disneyland’s Avengers Campus, which opened in 2021, the theme park was faced with a new challenge — innovating traditional American food.

Disney’s culinary team decided to lean into its superhero theme and rely on Ant-Man and the Wasp to create unique menu items.

The main dining area within Avengers Campus is called Pym Test Kitchen. Here, scientists use growing and shrinking technology to make monstrously large and surprisingly small creations. Guests can enjoy chicken sandwiches with massive chicken patties, spaghetti and meatballs with one large meatball, and soft pretzels that are the size of a head, among other items.

Next door is Pym Tasting Lab, a place for adults to enjoy craft beers and signature cocktails. The mixologists play with flavor, offering a variety of ingredients that range from habanero and mango to lemon and vanilla.

There are two food carts. The first is Shawarma Palace, a nod to the iconic mid-credits scene from “The Avengers.”

The other is called Terran Treats. This booth is located near the Guardians of the Galaxy ride and features items that play on traditional human foods. Circular rainbow churros and bright purple cream puffs are just a few of the delicacies available.

Venturing Back to Space

In creating the Star Wars Galactic Starcruiser experience, Disney took everything it had learned from Pandora, Galaxy’s Edge and Avengers Campus and set the bar higher.

As part of the total cost of the two-day experience, all meals are included. So for breakfast and lunch, guests are treated to buffet-style meals. They can pick and choose from a dozen or so options and eat as much, or as little, as they want.

“It fills you up and you have fun eating it,” Speigel said.

The dining room is equipped with a traditional soda fountain as well as free Blue Milk and Green Milk, which is featured in the Galaxy’s Edge park land. Special alcoholic beverages are the only menu items that need to be purchased separately.

For dinner, there is a set menu. And on the first night on board the Halcyon, dinner comes with a show. While guests are enjoying colorful bao buns and noodles, the galactic songstress Gaya begins her performance, a mix of pop, jazz, and rhythm and blues.

Chef Piasecki pointed out that the different-colored bao buns reflect the colors in Gaya’s outfit.

The beef tenderloin was glazed with tamarind and came alongside potatoes, the chicken was glazed in bourbon and lightly fried, the shrimp was cooked with lemon grass and served with coconut-lime foam, the rice was cooked with herbs and the “flora” was vegetables roasted with Harissa spice.

Dinner on the second night was a “taste of the galaxy,” featuring dishes based on different planets in the Star Wars universe. It was during this meal that Disney’s culinary prowess was on full display.

Each course was served simultaneously, with dozens of crew members descending into the dining room at once to deliver plates. There was a dish of cheeses and bread, inspired by the molten planet Mustafar; blue shrimp from the jungles of Felucia that arrives billowing in cool smoke; and a beef and seafood plate drawn from the Wookie home world of Kashyyyk.

The Galactic Starcruiser does have other options on its menu for those with less adventurous palates or dietary restrictions.

Alcoholic beverages can be purchased in the Crown of Corellia Dining Room as well as at the Sublight Lounge. Guests will recognize many of the signature cocktails, as they are based on traditional drinks, but they have been elevated.

The Hoth Icebreaker, for example, is reminiscent of a lemon drop martini but is served in a unique glass, colored blue and features a vanilla and lemon foam as well as an isomalt sugar garnish.

“What Disney has done with the starcruiser and that menu and what they are putting out, I think that will trickle down in many, many different ways throughout the whole industry,” Speigel said. 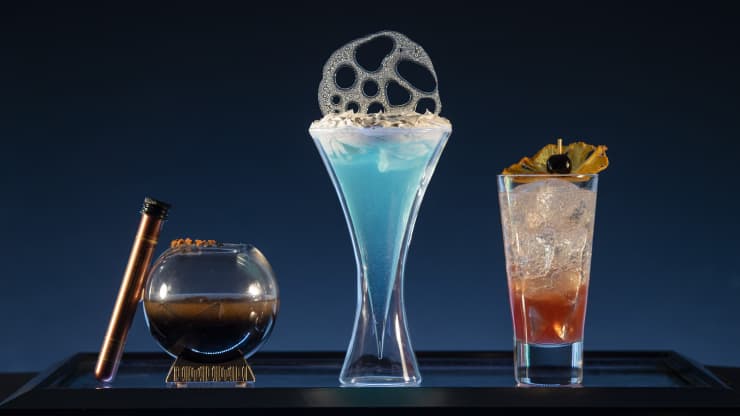