Walt Disney was always a step ahead of others in the entertainment industry, from pioneering animation and live-action films to revolutionizing theme parks.

He dreamed others would carry on his legacy of using the latest technologies to enhance the Walt Disney Co.’s storytelling, something Imagineers — members of Disney’s various creative teams — strive to do to this day, said Stacia Martin, an artist and historian with The Walt Disney Co.

“[Imagineers must] be innovative, be creative, but also remember that families are entrusting their future memories to you, and so make things magical [and] make things exemplary,” she said. “… We’ll take and harness things that are convenient and are excellent in the outside world, but turn them on their heads, make them unexpected, grow them, expand them and use technologies in unexpected ways.”

Disney’s creative teams are always looking toward the future of the parks, and Imagineers across the company provided insight into the future they hope to build during the start of Disney World’s 50th-anniversary celebration earlier this month.

Many of their thoughts on the parks’ future align with what theme park industry experts predicted visitors will see in the resort’s next 50 years, including an enhanced focus on guest immersion, advances in ride technology and using new intellectual properties.

Gary Landrum, senior show awareness producer with Walt Disney Imagineering, has worked with Disney for 44 years — almost as long as the Magic Kingdom has been open.

During his time at Disney, he said he’s seen huge leaps in the technology used for rides and attractions, from the debut of on-board audio for rides such as the Rock ‘n’ Roller Coaster to the creation of a complex 3D film projection system for Disney World’s latest ride, Remy’s Ratatouille Adventure.

“[Imagineers had to figure out] how do you move people through a physical environment, watching a 3D film on a convex screen with a 3D medium on it. … You had to work that technology out before you could ever tell the story,” said Landrum, who provided design documentation for the ride.

The technologies Imagineers build for Disney’s rides don’t exist purely for “the gimmick of the special effect,” Landrum said. They have to serve the dual purpose of advancing the story of the attraction.

Often, new developments in Disney’s technologies stem from older innovations created by the company. Opening in 2022, Guardians of the Galaxy: Cosmic Rewind will include a new Omnimover ride system designed to make riders feel like they’re soaring through space, but the vehicle design expands upon the ride system created for the Haunted Mansion over 52 years ago.

Theme park industry experts predicted enhanced forms of augmented reality, holograms and robotics will elevate Disney rides in the future and allow for more interactivity and customization. In the next few years, fans may even be able to log into theme parks from home via the metaverse — a project ITEC Entertainment’s clients have already expressed interest in, said president and CEO Bill Coan of the themed amusement company.

Landrum did not specifically name the new features he envisions for Disney’s future but said he hopes he and his peers continue to surprise themselves and park visitors.

Throughout the parks’ history, Disney has tried to deliver what its customers want.

Both Disneyland and the Magic Kingdom opened with Frontierland for fans of westerns, and now visitors to Epcot and Hollywood Studios can experiment with space tourism without leaving gravity behind.

Tom Fitzgerald, portfolio creative executive with Walt Disney Imagineering, said Disney is following consumer demand for experiences where visitors become active participants in the parks’ stories, like in the recently opened Space 220 restaurant set aboard a space station and the upcoming Star Wars: Galactic Starcruiser. These types of participatory attractions will continue to appear at Disney’s parks into the future, he said.

Designers made that a priority in creating Space 220, starting with the “elevator” where screens positioned above and below patrons show different perspectives of their simulated ascent to the space station from Epcot. Imagineers worked with NASA and other experts to vet its realism and based it on current and near-future technologies, Fitzgerald said.

“I could put you in a room and tell you that I’m doing that, but it’s far more effective if I create a theatrical experience for you to see it and feel it and hear it with your own eyes and ears,” Fitzgerald said. “… I hope the kids will truly believe it, come out and say ‘Where’s the cable? Where’s that space elevator that we rode?’”

The Space 220 experience also comes with a hefty per-person, prix fixe price tag of $55 for lunch and $79 for dinner. Current theme park visitors have shown they will pay a premium for exclusive themed experiences, and this trend will likely continue into the future, experts said.

On a larger scale, Zach Riddley, creative portfolio executive with Walt Disney Imagineering, said Disney will continue to develop the types of attractions that have debuted over the past decade with lands like Pandora: The World of Avatar and Star Wars: Galaxy’s Edge.

“Our opportunity and responsibility is to come in every day and think about what the future of these places could be and make it real,” Riddley said.

Pandora, which places visitors in the forested setting of 2009′s Avatar, was announced in 2011 and opened in 2017 at Disney’s Animal Kingdom. At Hollywood Studios, Toy Story Land opened in 2018 and Galaxy’s Edge launched the following year.

Industry experts projected Disney’s recent history of building lands based on intellectual properties into its existing spaces would continue as Disney uses its popular brands like Star Wars and Marvel and acquires others.

“The capital expenditure to acquire those brands requires that Disney leverage them in every possible way they can, from theme parks, to consumer products, to hospitality experiences,” Coan said.

Landrum, the Imagineer, said people will continue to come to Disney’s parks and engage with Disney’s stories because they crave the optimism of those worlds.

“Some people say the parks are about escapism; I don’t believe that at all. They’re about reassurance,” he said. “And there’s a big difference between those two, but there is a lot of wonder and hope and inspiration in the world; we just don’t get to bathe in it that often. And so coming to a Disney park gives people that opportunity.” 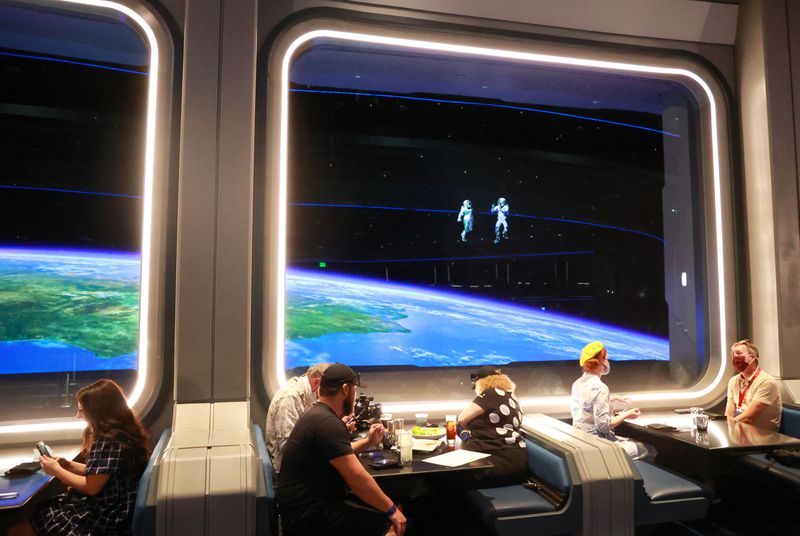