For theme park empires such as Disney, the guest experience is everything.

Rides, restaurants and character meet-and-greets are often what bring people through the park gates, but it’s the little things such as shorter waits, faster service and ambiance that keep them coming back.

On Wednesday, the company unveiled Genie, an app aimed at easing the process of planning a trip to Disney’s domestic parks.

After it launches this fall, guests will be able to tell the app what they want to do and where they would like to eat during their stay and the program will create an itinerary. It’s designed to be customizable and flexible, so if guests decide they don’t want to go on a ride or want to try a different in-park restaurant, Genie will reorganize the schedule.

Parkgoers can also use the app to order food and pay for merchandise. Current and forecast wait times for attractions also will be displayed.

“When people leave, the legacy of their visit is that they are going to go tell one person, 10 people, a hundred people,” he said. “Second, and probably more important, is that they will come back. Once you’ve got the people to your park, you’re done with the marketing and sales business. They are going to come back because they had a terrific experience.”

Genie, which was first announced in 2019 during Disney’s D23 Expo, arrives at a time when theme parks have become increasingly reliant on technology. Most of the amusements industry has adopted online-only reservation systems for tickets as a way to manage capacity. Parks have also added mobile order and pay options to decrease contact points between employees and guests.

These innovations were adopted to prevent the spread of the coronavirus but have improved the guest experience, said Josh D’Amaro, head of Disney’s parks, consumer products and experience division. It’s also helped theme park companies such as Disney staff high-traffic areas of the park and redistribute traffic to less-crowded locations.

A bonus is that consumers tend to spend more money when making purchases through mobile ordering and payment options than traditional in-person cash or credit card purchases, said Eric Wold, senior analyst at B. Riley Securities.

“Attendance has returned, and, more importantly, attendance has returned just about to 2019 levels, but at a higher monetization,” Wold said. ”[Parks] are extracting more dollars from these consumers and the parks are just being run more efficiently because of technology.”

A paid version, called Disney Genie+, will replace the domestic park’s FastPass, FastPass+ and MaxPass offerings, which were discontinued during the pandemic.

For $15 per ticket per day at Walt Disney World and $20 per ticket per day at Disneyland, guests can use the new Lightning Lane at select attractions. Visitors can make one selection at a time to bypass the main line at a scheduled time for rides such as Haunted Mansion, Big Thunder Mountain and Millennium Falcon: Smugglers Run.

In addition to Genie+, Disney will also offer individual attraction selections. Guests can schedule a time to ride up to two of its most in-demand attractions each day. This includes attractions such as Seven Dwarfs Mine Train at Magic Kingdom and Radiator Springs Racers at Disney California Adventure. Pricing will vary by date, attraction and park, the company said.

Standby queues and virtual queues for attractions such as Star Wars: Rise of the Resistance will continue to be available.

“Whether you are on your 50th visit or your first visit, I want you to feel that same special feeling,” said D’Amaro. “And that means I want to make sure that I am getting you to the things that are most important to you.” 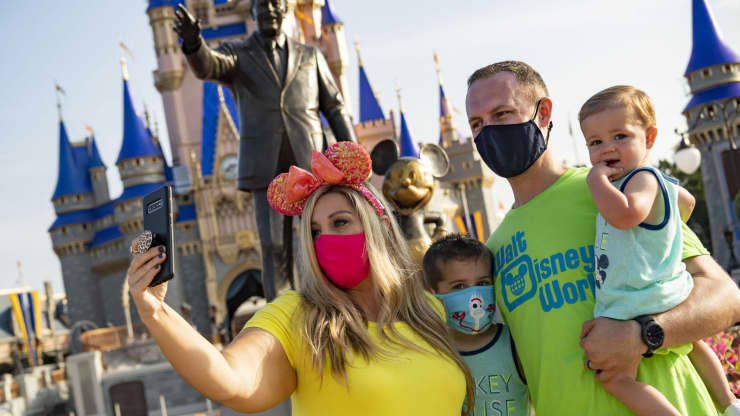