Disney World faces several new challenges over the next 50 years

When Nancy Giordano’s family first visited Walt Disney World nearly 50 years ago, her father took a look around the Magic Kingdom and declared the park was not going to last.“He was just like, ‘I don’t know.’ He was skeptical that it was going to really take off,” she said.Giordano, now a strategic futurist with Play Big Inc., helps others plan for the future. Her clients include entertainment companies, and she acknowledges her dad’s guess about Disney World’s future was “clearly wrong.”Nearly 18 months of the COVID-19 pandemic have proven the future can be unpredictable, but theme park experts say they believe Disney World’s leaders can navigate the next 50 years to maintain the resort as a world leader in entertainment. Even so, the theme park likelyfaces challenges as virtual reality options grow, climate change makes the summers even hotter and families have fewer children.Disney’s focus on storytelling will continue to take center stage in the next five decades, many predict, as emerging technologies helpthe resort pique the imagination of its guests.THEME PARK RANGERSDisney World golden statues shine bright for 50th anniversary (Ep. 113)00:00:00

The pandemic has helped Disney World, which is celebrating its 50th anniversary, realize it can successfully adopt the model of “fewer people, richer experience,” said Bill Coan, president and CEO of a theme park company called ITEC Entertainment.“They can create a much better guest experience with lower numbers of people coming in the park, and I’m not sure they would have ever considered that had the catalyst of the pandemic not forced their hand,” he said.This approach allows Disney to introduce more VIP options and premium add-ons into its parks, offering more personalized experiences to visitors while recouping the losses of admitting fewer people, he said.

Future park guests will be able to actively participate in Disney’s stories because of that. Premium experiences, like the upcoming Galactic Starcruiser hotel, will immerse visitors in Disney’s themed worlds and help the parks capitalize off their intellectual property investments such as the “Star Wars” franchise.“That is a part more and more of what people are trying to do … ‘I want to be in the story. I want to be in the adventure — I want to be a character in the adventure,’” said Tom Fitzgerald, a creative executive at Walt Disney Imagineering. “And so I think you’ll see more of that as we go.”Not all experiences will have a deluxe price tag. Galaxy’s Edge in Hollywood Studios provides a participatory experience to guests at no additional cost. Disney World’s future likely includes the construction of similarly engaging themed lands.To please consumers and the company’s investors, Disney will continue to focus its storytelling — its “superpower” — around its “core franchises” across the business, including at the parks, CEO Bob Chapek said at a recent investor’s conference.

Advancements in holograms, augmented reality and robotics technologies will help future guests become part of the parks’ stories, and guests might not have to travel to Disney World for these experiences.Holograms will enhance the realism of Disney’s rides, said Dennis Speigel, founder and CEO of International Theme Park Services, and allow visitors to interact with lifelike characters plucked from history and movies.Augmented reality will enable guests to experience the same attractions in different ways, said Len Testa, a computer scientist who runs a theme park planning website called Touring Plans. Disney could inexpensively create overlays, like a spooky version of Pirates of the Caribbean, to rides and charge guests a small fee to experience them while the attractions remain the same for other visitors, he said.“The potential to make the rides re-rideable, and to customize and personalize them, is something that hasn’t been explored, but I think that’s going to be a huge trend,” Testa said.Disney will continue to set the bar for robotics technologies, Speigel said. The Spider-Man robot recently revealed at Disneyland stuns crowds the same way Disney’s animatronic Abraham Lincoln wowed audiences at the 1964 World’s Fair, he said, and robots could even replace some workers if Disney moves toward automation.Guests will likely not need to leave their homes to stroll around the parks soon. Coan said ITEC Entertainment is working with clients who hope to develop theme parks in the cloud so visitors can interact in the next phase of the Internet known as themetaverse.But the metaverse could also emerge as a major competitor for Disney World. By allowing people to interact in fully digitized environments, the metaverse will let people socialize, entertain themselves and explore new worlds in unprecedented ways.The companies creating these digital frontiers have different visions. Facebook’s Horizon program lets users wearing Oculus headsets create avatars to interact and play in a virtual space. Epic Games’ Fortnite has expanded beyond a battle royale game to become a venue for concerts and dance parties, even allowing users to craft their own customized lands.Virtual theme parks could take similar formats, but people will still crave the experience of actually being there.“I don’t care how good virtual reality or augmented reality gets, you can’t simulate the feeling of being on a roller coaster unless you’re actually on a roller coaster,” Testa said.

Disney’s leaders will have to plan for climate change, which will have a huge impact on Central Florida’s already hot and humid environment, Testa said.Average summer temperatures across Florida will likely top 83 degrees by 2040, and by 2070 forecasters predict Orlando’s summer average could hit 88 degrees, with the number of days a year over 95 degrees soaring from 21 to 135.These changes could make Orlando insufferable during certain seasons and times of the day. The heat could cause Disney to shift its operating hours to the early morning and later at night, Testa said. Disney could also encourage guests to visit during different times of year, or advocate for year-round school to disperse summer crowds, he added.The resort could also provide more shade, install additional misting fans in its outdoor queues and expand its water play areas, as it and other parks have started doing to help keep visitors cool. In recent years, many visitors have taken the initiative to beat the heat, wearing cooling neck wraps and portable fans almost year-round.Theme park audiences could also change with demographic shifts as birth rates fall globally.The US.’s fertility rate fell a sharp 4% in 2020, signaling the sixth consecutive year of decline. Citing the high cost of child-rearing, young couples are having fewer children or delaying growing their families, which economists say could extend the trend into the future. Fewer children may mean fewer future guests at and lowered interest in Disney parks.

Experts think it’s unlikely Disney will build a fifth park at the resort in the next five decades. They believe Disney will instead focus on upgrading its parks by building new lands and incorporating new intellectual properties into the current space.Universal Studios’ development of its fourth local theme park, Epic Universe, will increase competition between the companies and fuel their ongoing arms race, they said. Visitors, and the industry, will benefit as a result.“Rising tide floats all boats,” Coan said. “… Disney will, in turn, fire back with some really great attractions, hospitality features and experiences because the battle is going to be not just to get people to come but to keep them on your property longer.”Whatever successes or challenges Walt Disney World Resort experiences over its next five decades, the company is guaranteed to transform in ways no team of experts can fully predict as it moves toward the “great, big, beautiful tomorrow” that’s praised in Walt Disney’s Carousel of Progress.krice@orlandosentinel.com

Read the Orlando Sentinel’s “Disney World at 50″ series — a year’s worth of stories leading up to the 50th anniversary of the historic opening of Walt Disney World on Oct. 1, 1971. Find stories, photos and videos at OrlandoSentinel.com/wdw50.

Katie Rice is a business reporter covering theme parks and tourism in one of the nation’s busiest travel destinations for the Orlando Sentinel. She previously covered criminal justice and safety in Orlando. She earned degrees in journalism from Northwestern University and the University of North Carolina at Chapel Hill and is fluent in Spanish. 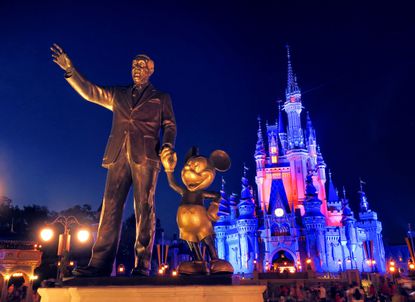