ORLANDO, Fla. — When Disney opened the Star Wars: Galaxy’s Edge park in 2019, fans were promised the new land within Hollywood Studios in Orlando would have its own hotel. Three years later, we have an entirely new attraction where the hotel stay is the experience.

“What we want to do is bring another Star Wars story to our guests,” Jared Sell, Galactic Starcruiser’s project manager said. The Star Wars franchise is once again redefining the entertainment industry with the help of Disney by making fans part of the action. “Now we want to take it to that next level and you can actually live there, sleep there on a ship and live out your Star Wars dreams,” Sell said. It’s a brand-new concept for Disney and the theme park industry.

“There was a desire to go even deeper and to really start getting into that cosplay role-playing and being a part of something even more significant than a 6, 8, 10-hour stay in the parks,” Sell said. “Then you start to explore the idea of how do you layer upon all of the things we have learned and developed and pull that all together and really start to develop a new product for the industry here.”

News of what Disney was planning for a Star Wars-themed hotel first broke in 2019, as their themed land Galaxy’s Edge was about to debut. “As soon as they said there was going to be an experience just for Star Wars fans, I mean applause everywhere. Star Wars fans were so excited,” Michele Atwood said.

President of the popular Main Street Mouse blog, Atwood was there at the D23 Expo in Anaheim, California as some of the first plans for the Galactic Starcruiser were announced. “I don’t think they’ve ever done anything this unique. I mean this is something that is so different than anything they’ve ever done,” Atwood said. “It’s like being on a cruise for two days, but you’re not really going anywhere but they’re going to make it look like you are This is the first of its kind and I think that’s why people were so excited but a little bit confused because no one really understood what we’re in for.”

When you check into your two-night stay aboard the Halcyon Starcruiser, you become part of the adventure, interacting with everything and everyone around you. The idea of a totally immersive experience is a business model that extends beyond simple hospitality. Bill Coan is a former Disney Imagineer who now works with major entertainment companies around the world.

“It’s exciting for us because we’re anxious to see how it affects the rest of our business,” Coan said. “The rest of the world watches these things very closely. And, and I assure you, they’re already asking us about this. Entertainment companies around the world aren’t the only ones watching the Galactic Starcruiser’s success closely. “My students are really excited. So am I. It’s a whole new kind of venture for Disney,” Peter Weishar said. Weishar is the program director of Themed Experiences at the University of Central Florida, a newly established degree program that answers the question: what does it take to create an immersive experience. “This is the international hub of the themed entertainment industry. So we use Orlando as a classroom,” Weishar said.

WESH 2 asked Weishar what he believes are the most groundbreaking elements of the Galactic Starcruiser.

“If you were doing a successful special effect for film, right, it might work for a couple of seconds, it has to work from one point of view, and boom, that’s done. It’s a great special effect,” Weishar said.

“If you’re doing a practical effect, or special effects or a dark ride, it’s got to work maybe 1,000 times a day. But it’s going to work from one point of view until the car moves on to the next effect, right? For the Galactic Starcruiser, you can live in that cruiser for two days, you get to see it over and over again, you can walk around it, inspect it, there’s a kind of a level of finish that’s expected in the Starcruiser that’s going to be different than something that you’re going to see for a second or two. So that level of detail is something that most companies can’t pull off to be quite honest with you.” 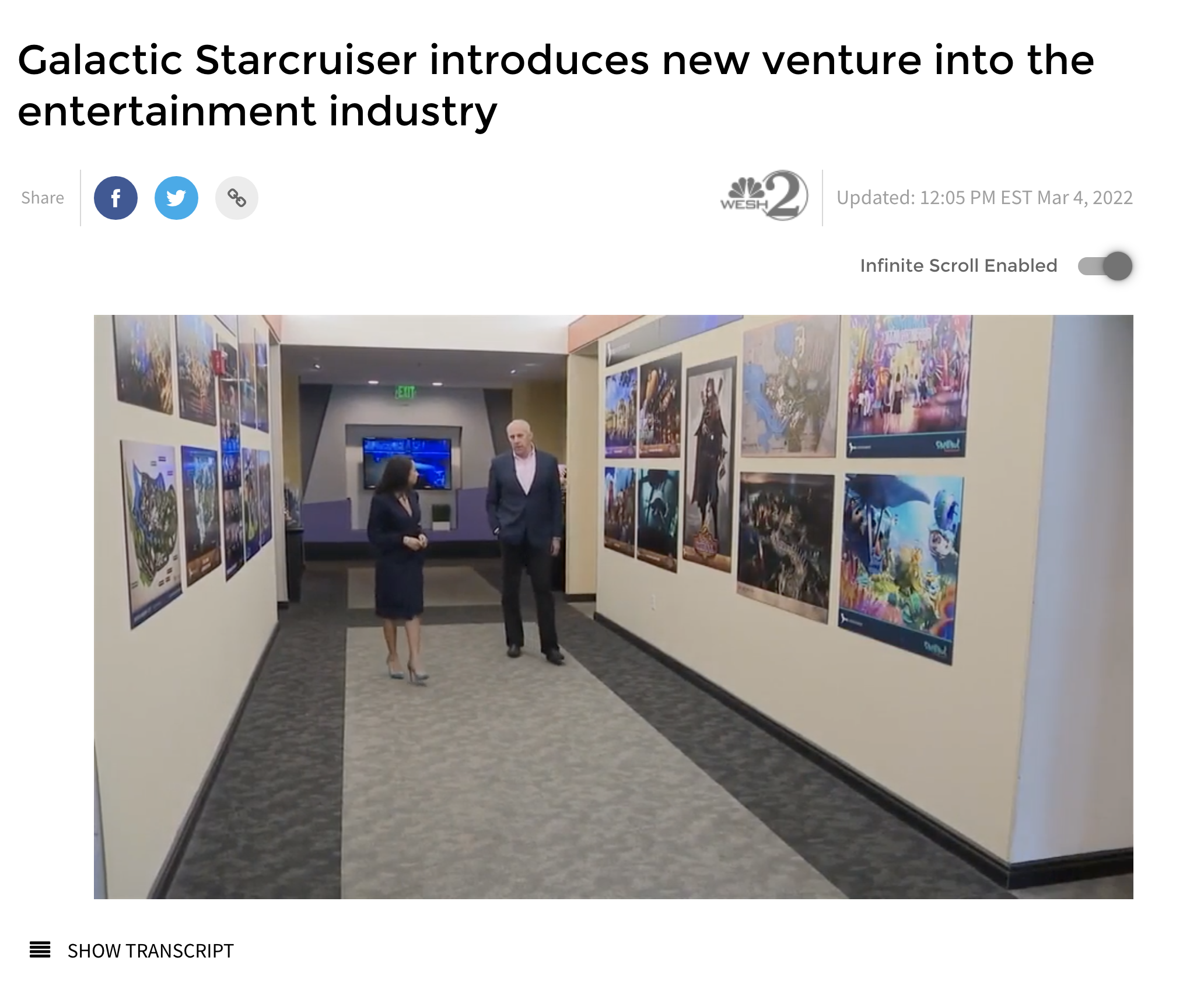