Halloween may not be until the end of October, but for theme parks, it started all the way back in September.

Haunted houses, creepy mazes and coaster-riding ghouls can be found at amusement parks big and small across the United States this time of year.

Spooky-themed events were once a way to extend operations at regional parks well into the autumn. Cold temperatures made riding rollercoasters less appealing and, with school back in session, families were less likely to attend during the weeks after summer ended.

Knott’s Berry Farm, which first launched its Knott’s Scary Farm event in 1973, was the first park to dream up a Halloween-themed event. Others quickly followed suit. These days, Disney, Universal, Six Flags, SeaWorld, Busch Gardens and countless other regional parks have created their own scary and not-so-scary spooktaculars.

“Special events are the key to the success of the theme park business model,” Bill Coan, president and CEO of ITEC Entertainment, said. “You find your kind of slow periods and you create an operating attraction that pulses people back to the facility.”

But luring guests back to parks in the off-season isn’t the only reason theme park operators have embraced Halloween. In fact, there is very little luring that needs to be done.

These events have become incredibly popular with guests both in the U.S. and abroad, often padding the bottom line for operators.

In February, Six Flags reported record results for its Fright Fest and Holiday in the Park events in 2018, which helped boost revenue in the company’s fourth quarter by 5%.

“The Fright Fest and Holiday in the Park franchises are booming, and they will continue to boom,” James Reid-Anderson, chairman, president and CEO of Six Flags, said during that February earnings call.

Most parks start their Halloween-themed events in early September. However, as interest in these limited-time-only mazes, haunted house and experiences grows, parks are opening them earlier and earlier.

Disney, which hosts a family-friendly experience called Mickey’s Not-So-Scary Halloween Party, is hosting its Halloween event for a record 36 nights. The park had swapped over to pumpkin decorations in mid-August, opening the event on Aug. 16 with plans to run it through Nov. 1.

Disney offers a number of parades, fireworks shows and in-park entertainment that promises to delight, not terrify. Kids and parents are even invited to dress up and go trick-or-treating throughout the park.

While Disney minimizes the gore, it does like to have fun with its catalog of villains. The Sanderson sisters from “Hocus Pocus” have their own Halloween-themed bash in the park and Cruella de Vil hosts a soiree at Tony’s Town Square Restaurant.

Another family-friendly park is SeaWorld. In both San Diego and Orlando, the park offers trick-or-treating as well as a Sesame Street Halloween parade.

Of course, SeaWorld also operates Busch Gardens, which enjoys bringing the scares during the Halloween season.

“Halloween is a good opportunity for all of our parks. To have a new time of year to show our parks, to create new experiences and new reasons for guests to come back and really see how the parks evolve and change throughout the year,” Matthew Edwards, entertainment manager of consumer events for Busch Gardens, said. “Halloween has just evolved into a huge part of our parks.”

“We are family-friendly until 6 p.m.,” Edwards said. “No monsters, no terror, nothing too frightening, but once six-o-clock rolls around we release the monsters.”

The pride of Busch Garden’s “Howl-O-Scream” event is a roaming pack of actors called “coaster creepers.” Dressed in patchwork costumes, sewn-together masks and carrying items like chainsaws, this group ventures around the park interacting with guests and will even hop onto rollercoasters to get a few extra screams out of the riders.

While the Williamsburg location doesn’t see a large population of international travelers, the majority of guests tend to be from within a 300 mile radius, the Tampa Busch Gardens and sister park SeaWorld in Orlando experience an uptick in the fall.

The temperatures are cooler, the parks don’t have the same hordes as the summer months and global visitors enjoy experiencing Halloween, something that isn’t quite as popular outside the United States.

Coan noted that these kinds of events, particularly showstoppers like Universal Horror Nights, bring in people from around the world.

Universal, unlike most of its rival parks, has a unique advantage when it comes to creating horrifying entertainment in the autumn. The company produced some of the earliest horror films in the 1930s and continues to produce spooky productions like Jordan Peele’s “Us,” “Halloween” and “The Purge.”

This year, Universal will use the film “Us” for one of its haunted houses. It also has a “Stranger Things” haunted house, one that is “Ghostbusters” themed, as well as a monster-filled house, one teeming with “Killer Klowns from Outer Space” and one based on “House of 1,000 Corpses.”

Universal also has the ability to reach into its talent pool of filmmakers and actors to elevate its live-action entertainment.

Coan said this type of social experience is a great balance for theme parks to have. A lot of times, theme parks are using technology — rides, animations and facades — to engage guests.

“All the technology in the world and we can’t recreate the real thing,” he said of providing real scares with real people. 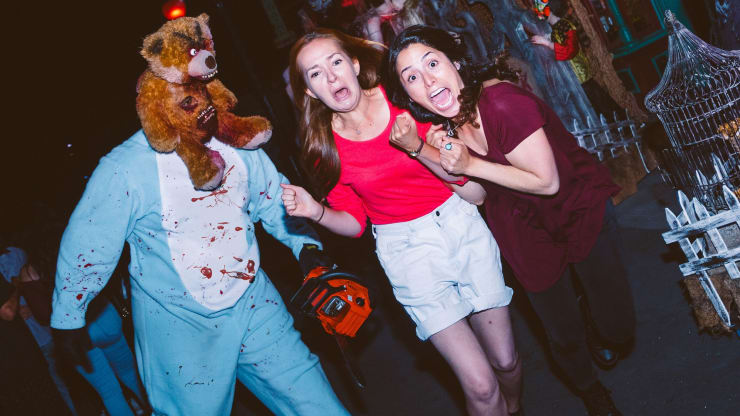