The Target and Disney Partnership is Magic

The House of Mouse’s big move into Target stores has a lot riding on it.

“To infinity and beyond!” is Buzz Lightyear’s catchphrase in Disney’s Toy Story.

He could be talking about the new partnership between Target (NYSE:TGT) stores and Disney (NYSE:DIS).

On Aug. 25, the two companies announced that 25 Disney stores will open within certain Target locations across the United States. By October 2020, that number is expected to increase to 65.

The Disney store-within-a-store will be about 750 square feet and will be adjacent to the toy and children’s departments. This sneak peek, provided by Target, shows how the newly designed space will accommodate about 450 products, including more than 100 previously available only at Disney stores.

“We know there’s a very strong overlap between both Disney fans and Target shoppers, so we’re looking forward to reaching Disney fans when and where they want to shop,” Target CEO Brian Cornell said. “It’s an opportunity for us to bring our brands together and delight our guests for years to come.”

“Our fans are always telling us that they want more Disney,” said Bob Chapek, chairman of Disney parks, experiences, and products, in a conference call with investors. “We believe that by extending our Disney footprint to Target stores, we’re going to be able to give our guests that opportunity.”

The Disney areas within Target stores will also contain stations where customers can watch Disney movie clips or listen to Disney music.

“It’s in Target’s best interest for Disney to be showing seasonal shows that will cause customers to visit the store more often,” said Jason Goldberg, chief commerce officer at retail consultant Publicis. “If you’re Disney, you’re trying to figure out how to reach consumers and have a direct relationship with consumers. Disney was early to open stores but are now in unappealing real estate (malls); moving those efforts over to Target, which are still enjoying traffic growth, [is beneficial].”

In turn, Disney agreed to the 2021 construction of a small-format Target store in Flamingo Crossing, a planned development within Walt Disney World. “That’s a Disney sweetener that very few brands can offer,” Goldberg said. “It’s the new retail — seeing more novel partnerships.” Flamingo Crossing already has six hotels and 2,600 apartments, with plans for six more hotels, all aimed at the budget-conscious.

Exclusive collaborations have been part of Target’s success for 20 years, starting with Michael Graves in 1999. Limited partnerships with designers Vineyard Vines, Victoria Beckham, SoulCycle, and others have sharply driven up retail traffic, causing customer competition for the hottest items.

What does this mean for investors?

By contrast, Disney missed Wall Street expectations in the most recent quarter. The miss was blamed on the $71 billion acquisition of Fox’s entertainment assets and ongoing expenses associated with that integration.

In November, the Disney+ streaming service rolls out at a cost of $6.99 per month, undercutting the cheapest Netflix offering, which is $9. Disney+ will feature proprietary content from Disney, Pixar, Marvel, the world of Star Wars, and more.

Additionally, major movies The Rise of Skywalker and Frozen 2 will be released in time for highly anticipated holiday merchandise sales.

Year-to-date, Target stock is up 59%, and Disney is up 22%. Investors are wondering if this new collaboration will send stock prices to all time highs. Let’s take a look.

Currently, Disney’s access to retail customers is centered on its mall locations, where overall traffic has been decreasing. The Target partnership will help Disney expand access to customers on a regular basis. It will also increase Disney’s store count by about 22%.

Disney’s performance in retail has been average at best. Target is an all-star in marketing and omnichannel retail, and it attracts higher-income customers in the 18-to-44 demographic than, for example, Walmart.

Target CEO Brian Cornell didn’t say how much Disney merchandise currently generates for Target in terms of sales or how much revenue is expected to come from the Disney store expansion. Investors should keep an eye on reported Disney merchandise sales as the earliest indicator of a successful partnership.

Longer-term, look for increased earnings per share for both companies. Disney will benefit from significantly increased sales opportunities, and Target from bigger market share of higher-margin Disney toy sales in the holiday season.

“Target stirs up excitement for its customers and gives them a reason to come to the store,” said Robin Sherk, director of research at CB Insights. With Disney, Sherk said, Target gets extra “credibility” as a place of fun and entertainment.

Bill Coan, CEO of entertainment design and development firm ITEC Entertainment and a former Disney Imagineer, agrees that the collaboration is a great idea. “You can hardly find a better partner than Disney, if you want to expand or elaborate an experience into retail,” Coan said. “It’s bringing a first-class entertainment entity like Disney into a first-class retail store like Target, with a matching demographic appeal to families. You can’t get any better synergies than that.”

Target already carries some Disney merchandise, though not yet in a dedicated shop format. If the sold-out popularity of the 50th Anniversary Haunted Mansion collection is any indication, the new collaboration should bring a lot to both companies’ bottom line. For both Disney and Target, it looks like a magical holiday season awaits.

Stocks we like better than Target
When investing geniuses David and Tom Gardner have a stock tip, it can pay to listen. After all, the newsletter they have run for over a decade, Motley Fool Stock Advisor, has quadrupled the market.*

David and Tom just revealed what they believe are the best stocks for investors to buy right now… and Target wasn’t one of them! That’s right — they think these stocks are even better buys. 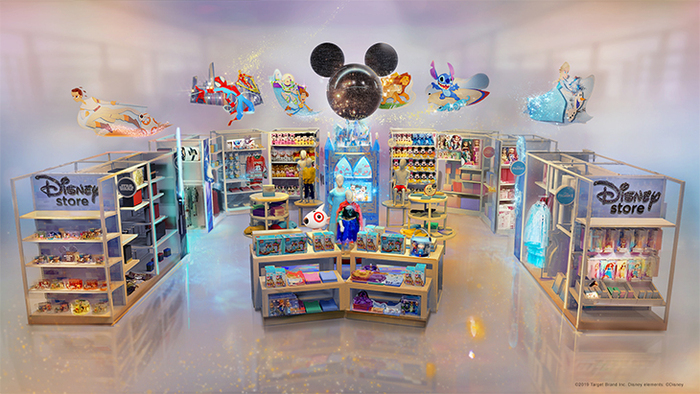