Theme Parks, the Internet of Things and ITEC Entertainment

Technology continues to be an increasingly important element of the theme park experience. On rides and behind the scenes, these tech implementations are improving the guest experience and are enabling theme park leaders to make better informed business decisions.

I recently spoke with Marc Plogstedt, chief technology officer of Orlando-based ITEC Entertainment, about the Internet of Things and its effect on the theme park industry. What is the Internet of Things? Put very simply, it is the “extension of Internet connectivity into physical items” such as smart home devices and appliances.

Marc has been with ITEC for more than 33 years and plays an integral role in the design, management, integration and implementation of the company’s award-winning, themed entertainment solutions for clients such as Disney, Universal and Six Flags.

C101: Can you tell me how you became involved with the themed entertainment industry and ITEC Entertainment (ITEC)?

Marc: As many themed entertainment professionals would likely say, I caught the theme park bug at a young age. I grew up in Florida before Walt Disney World was even built. I was fascinated by the immersive experiences they were able to create. I started working at the park when I was still in high school, and that evolved into a career which included working on projects at Epcot, Disneyland and Tokyo Disneyland. After completing a project in Disneyland where we built the first all-digital audio attraction, I founded ITEC Entertainment in 1985, which has now been doing really cool projects all over the world for over 30 years.

ITEC was founded in 1985, and your extensive client portfolio is quite impressive. How has the company managed to evolve and stay relevant in such a rapidly changing industry?

One of the first things I learned at Disney still holds true today; the “story” and the “guest experience” are the most important elements to any project. Technologies, ideas, intellectual properties (IP) and consumer interests may change, but the fundamental development of theme parks and the underlying components that make them run are largely the same as they’ve always been.

We have teams that keep pace with the latest innovations and are always redefining our design principles to support new guest experiences. We make massive guest experiences come together and ensure they create an emotional connection to each guest. Of course, we also have to make them operate efficiently over time and will continue to provide this for all the major theme parks we work on in the future.

Internet of Things (IoT) is becoming an increasingly common term even outside of the tech space. Can you briefly describe how it relates to the themed entertainment industry? What are some common IoT applications in today’s theme parks?

These systems consist of hundreds of devices and subsystems which all must communicate with each other to allow the project to run efficiently, provide predictive breakdown analysis, and now direct guest interaction.

One of the most recognized guest-facing IoT applications is the Disney MagicBand bracelets, which help expand and enhance the guest experience. Another example is the Volcano Bay Waterpark in Universal Orlando — guests are given a digital device which they can use to help manage their experience. This helps them figure out wait times for rides, set up photo opportunities and plan their overall experience. These devices also generate data back into the system, which allows the operator to monitor guest traffic and enable better park management decisions to reduce area congestion.

What are “M2M roller coaster motors?”

M2M stands for machine-to-machine communication and is used in IoT initiatives and other industrial control equipment. For roller coaster motor applications, it is often used to control large numbers of motors which must work in harmony to perform a function such as the launching of a ride vehicle.

Another use case of M2M communication is connecting sensors to the motors to communicate data to an information center, which can report any operational or maintenance issues before they arise. This allows maintenance technicians and operators to react to predictive information which can increase reliability, keeping guests from the disappointment of out-of-service rides.

While improving the guest experience is always a priority of theme park operators, what are some ways that IoT technology can benefit the leadership at these parks?

IoT offers better intelligence to improve decision making at parks. The business of designing massive interconnected experiences is both deliberate and abstract, requiring operators to understand the behaviors and enjoyment of large groups of people. Any IoT devices that can help operators glean better insights into how these areas are being used by the guests is a huge advantage.

Operators can use the data to determine what type of attractions to build in the future, improve line management, and understand what rides are popular at which times with more granularity. The latter can help operators tailor ride hours based on the data and significantly reduce operational costs over time.

With storytelling remaining a core feature of many theme park attractions, how are these IoT technologies and applications enhancing that immersive experience?

In the future, there are going to be plenty of attempts at building immersive applications. However, in the near term, I believe that IoT devices will primarily be used for guest convenience and back-end operations. As these technologies improve, and the industry learns how the audience wants to interact with these attractions — and how much — the use of IoT devices will evolve.

Theme parks being built from the ground up seem to be more prevalent in overseas markets. How do designers approach IoT implementations with a “blank slate” rather than incorporating them into an existing infrastructure?

In new theme park builds, the main advantage is that the whole park’s communication network can be developed to current standards, which allows for robust communication with IoT devices. With existing parks, you tend to see specific attractions upgraded to support IoT functionality. This is not a huge disadvantage because “blank slate” IoT development might allow for more robust applications in some capacity, but considering the flexibility of IoT deployments, it’s not difficult to overlay onto existing infrastructure.

Can you share one or two of your favorite ITEC’s IoT-related implementations at theme parks? Are there specific attractions that stand out in your memory?

Well some of the attractions we are currently working on, which I can’t talk about, have some really cool IoT-style applications in them. For direct guest application, I would say the Disney MagicBand system is very impressive. For behind-the-scenes applications, the various Universal Harry Potter attraction’s level of integration is fabulous.

As we approach the end of the 2010s, what are some of the major changes and new trends that you’ve seen develop over the past decade?

Technology has evolved to a point that we can now start to think about providing truly personalized experiences in attractions. This will put more demands on both the storytellers and the technology, but it’s essentially the last mile to fully connect to the guest. I believe guests now expect that the entire attraction space is used to faithfully reproduce the story. Attractions used to start at the front door but now it extends throughout the surrounding area. Just look to the example of Diagon Alley or Star Wars: Galaxy’s Edge to see where this is going.

Does ITEC have any new technologies or developments in the pipeline that you can discuss? Or any that were recently released?

We aren’t able to share our confidential or proprietary R&D projects at this time, but ITEC is constantly working to evolve entertainment technology in an effort to support the latest in immersive storytelling. To date, we’ve worked with Universal on over 70 of their projects, and because they are one of the two major theme park developers that set the bar for new guest experiences, we are proud to be a part of that success.

As we approach the 2020s, what excites you the most about the future of the themed entertainment industry? Are there any specific trends related to IoT technologies that we should look out for?

There are a lot more fascinating stories to be told! Just like books, comics and films have fueled the last wave of storytelling, the next few decades will see the crossover of gaming (mobile/console), bringing the stories created in those environments to themed entertainment projects. Since gaming is already an interactive media, the demands to faithfully recreate those environments will be enormous.

Technology, some of which does not exist today, will be central to achieving these goals. But as I always say, technology is a tool, not an attraction. When you experience an attraction and say “how did they do that?”, then they got the technology just right.

Do you have any advice for students or young professionals who are interested in careers as a designer in the themed entertainment industry?

There is no single path or field of study to enter this industry. To create these projects, the industry needs what seems to be a continuously widening range of highly skilled people. Architects, engineers, writers, artists, software engineers, project managers, accountants — you name it — this industry needs the next generation of them. Find a good school, push yourself, do the hard work, master the basics, build a great portfolio. Most of the people I’ve worked with over my career have all come from different industries and their experiences were critical to solving some of the most difficult challenges.

We’d like to thank Marc for taking time to speak with us about the work ITEC is doing for the industry. To learn more about ITEC and IoT in theme parks, visit their website.

What had been your favorite implementation of technology in a theme park? Share in the comments section below! 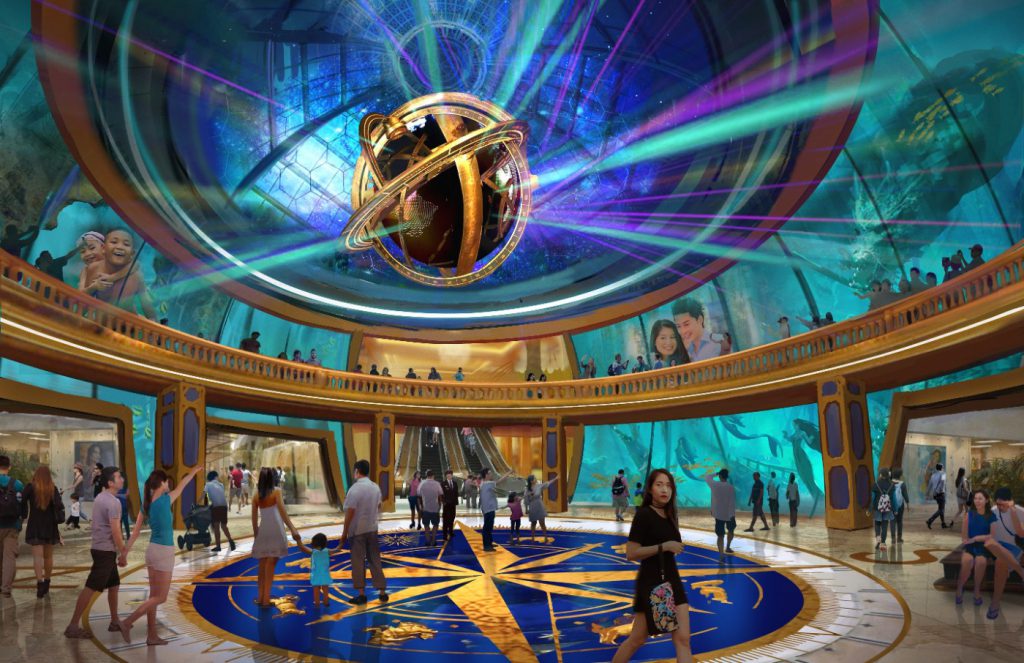