Theme parks will be different the next time you visit, as operators flip the script on a century-old business

Theme parks are designed to have crowds.

That’s the crux of the issues that theme parks big and small are facing in the wake of the coronavirus pandemic, said Bill Coan, president and CEO of ITEC Entertainment.

The amusements business is built on crowds and communal experiences. Rides have been constructed to accommodate more riders. Parades and fireworks shows were created to entice people to congregate and remain in the park later in the day, and dining areas were designed to seat as many guests as possible.

Now, owners of national and regional parks are trying to rewrite the theme park playbook so they can reopen in the midst of Covid-19.

“Visitor attractions will feel and look like very different spaces when they reopen,” said Sabine Lehmann, founder and CEO of Curiositas, a consulting company specializing in attractions and tourism.

“We leave home in order to have shared experiences and it is precisely the sharing of the experience (whether in your group or with strangers) that will change,” she said.

Currently, Shanghai Disneyland is the only major theme park to reopen during the outbreak. While there are no plans for Disney to reopen any of its other international theme parks, the company will reopen Disney Springs, a shopping and entertainment center in Florida on Wednesday.

Universal has said its parks in Florida are expected to be closed until at least May 31; however, it has not provided a specific reopening date. Its shopping and entertainment area, CityWalk, in Orlando is set to partially reopen Thursday.

Regional parks such as Six Flags, Busch Gardens and Cedar Fair are also currently shuttered and awaiting state guidelines in order to be able to open their gates to the public.

The timeline for reopening these parks is up in the air. Some analysts have predicted that park doors will remain closed until 2021, while others see them opening as soon as June 1.

Here’s what theme parks could look like once they are able to reopen:

To start, many changes will be clearly visible to the guest.

Health guidelines internationally and even state-to-state in the U.S. may vary. However, common Covid-19 measures have included 6-foot social distancing, the use of face masks, cleaning surfaces more often and checking people’s temperatures before admitting them to certain locations.

“How attractions are able to implement these without ‘sanitizing’ the whole experience will be interesting,” Lehmann said. “People want to be safe, but don’t want to sit in a cloud of disinfectant all day.”

Coan noted that many of these measures will be obvious to visitors. Parks are going to want guests to feel comfortable during their stay, so companies are going to go out of their way to show that areas are being cleaned regularly and will post plenty of signage for social distancing and sanitation stations.

Perception is going to be key for parks in gaining trust with parkgoers.

Following the blueprint set by Shanghai Disneyland, expect parks in the U.S. to place a cap on the number of attendees. Disney’s Shanghai park is currently operating at less than 30% of its capacity.

Occupancy caps at other parks will be dependent on government guidelines in each country or state. For example, a Florida task force has suggested that theme parks reopen in the state with a 50% cap to start.

Rides, too, will have occupancy caps in order to maintain distance between passengers.

Parkgoers should expect to be asked to wear a mask and to have their temperature taken at the gate in addition to the standard security check. Folks will be permitted to remove their masks to eat, but it is unclear how parks plan on enforcing the use of masks throughout the day.

Guests who are permitted inside will have to purchase their tickets in advance, as parks are going to want to carefully control crowds. This will also remove the physical interaction of an employee handing out tickets to guests and guests handing tickets to other employees in order to enter the park. Some parks may not allow tickets to be purchased at the gate.

Similarly, many parks will offer cashless pay options, if those systems are not already in place, to help reduce the use of cash and physical touch between employees and guests. Mobile ordering at park restaurants will also likely become more prevalent.

“Parks are not getting rid of cash, but encouraging people not to use it,” said Dan Doyle, an amusement park safety expert with the Robson Forensic firm.

Like many retail locations currently in operation in the U.S., parks could use plexiglass barriers between cashiers and customers as an added safety measure.

Queues for attractions, restaurants and restrooms will have posted social distancing markers to keep parkgoers separated while they wait in line.

“I know some [parks] may also institute a bypass,” Doyle said. “Instead of standing in line at a queue, you make a reservation for the coaster and when it’s your turn then you can come and ride the ride.”

Disney’s Magic Bands are a good example of how that company has been able to integrate cashless pay and fast passes with technology. The company also has an app just for its theme parks that guests can use to make reservations for rides, mobile order from restaurants and make purchases at gift shops.

Additionally, any live events that encourage parkgoers to congregate in large groups will be suspended temporarily. That includes daily parades and nightly fireworks shows. These can draw massive crowds, exactly what parks are trying to prevent.

However, these performances won’t be gone for long. Parks rely on fireworks, in particular, to keep guests at the park longer, so they will spend more money. Without those night shows, parkgoers will have less incentive to stick around. So, parks are going to try to devise a way to have these events in a safe manner.

Eventually, parks will begin to raise attendance capacity. This could be because restrictions have lessened or because a vaccine has been approved and distributed.

At this point, technology will be more seamlessly integrated into theme park operations. Fewer people will use cash, and ticketing and ride reservations will be digitized.

“In the middle term, tech will start to replace all those things that people were doing,” Coan said.

Employees who were responsible for physically counting the number of people in queues for rides or the restroom will be replaced with automatic counters. Additionally, mobile ordering will become more ubiquitous, reducing the need for cashier labor. That labor can be redistributed to the kitchens.

“All touchpoints that are transactional in nature will move to no- or low- touch transactions,” Lehmann said. “This will initially be motivated by Covid-19 hygiene standards and soon become a new norm. This does not mean that human touchpoints will be eliminated; just that they will be reserved for those points that truly add value to the experience.”

Long term, parks will begin to design rides a bit differently, Coan said. Queuing and riding strategies that focused on packing people into close quarters will change. However, parks will have to get creative on how to maintain throughput and the guest experience.

“The demand will be there,” Coan said. “At first there will be some concerns, but ultimately people will go back to these parks.”

Disclosure: Comcast is the parent company of NBCUniversal and CNBC. 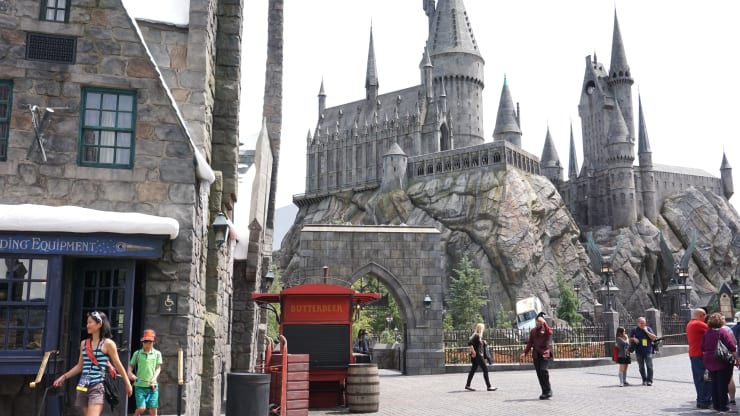