As Orlando gears up for the biggest annual theme-park convention in the world, some industry leaders are fretting about how the U.S. trade war with China is affecting the attractions business.

President Donald Trump and Chinese President Xi Jinping have been trading barbs and retaliatory taxes on imports since 2018, when Trump set tariffs and other barriers on Chinese imports, as the administration pushed for a change to what it called “unfair trade practices.”

NPR reported in June that Chinese tariffs on American-made amusement rides of more than 25 percent had caused some businesses in the industry to rethink their strategy in Asia.

But the trade war also happened to coincide with a market that had already started to cool off, some experts said.

“I have had noticeably less interest from China than I used to,” said John Gerner, a 30-year veteran of the industry who runs a Virginia-based consultancy called Leisure Business Advisers. “It’s consistent with what I’m hearing in other parts of our industry. The government out there plays a major role in all industries, so it is not surprising they would use our industry as part of their reaction to tariffs.”

But, thanks to an emerging South American and other world markets, the overall effect could be mitigated.

“It would be silly to say there is no effect,” said Bill Coan, CEO of the entertainment theme park design company ITEC Entertainment Corporation in Orlando. “There isn’t a time when I’m in China that the trade conflict doesn’t come up. That’s natural. But when we do business there, it has not been affected by the trade discussions.”

ITEC leaders and thousands of others plan to attend the International Association of Amusement Parks and Attractions convention at the Orange County Convention Center from Nov. 18-22.

Industry leaders generally make high-profile announcements at the trade show, which also often includes the North American debut of theme park rides in an outdoor area of the convention.

Orlando “is like the Wall Street of tourism,” said George Aguel, CEO of Visit Orlando. “You have to be here (for IAAPA) if you are in the attractions industry.”

While some experts expect a drop in attendance from China, they say that’s more likely related to IAAPA’s hosting of a show in China this June for the first time in three years.[Popular on OrlandoSentinel.com] Epcot sets lineup for Broadway concerts during 2020 arts fest »

Officials with IAAPA, which moved its global headquarters to Orlando in August, did not have specifics about which Chinese companies plan to attend this year, but its pre-show packet showed that several will be there.

“You’ll probably see a little bit less attendance because there are two shows now,” said Dennis Spiegel of International Theme Park Services in Cincinnati. “There does seem like there will be a lot more tire-kicking than buying this year, though.”

As the market in China cools, South America has become a more viable market for attractions and theme-park builders.

“There has been an explosion of development in South America,” said Speigel, noting that Uruguay, Paraguay, Argentina joined Brazil in eliminating that tax. “It’s a huge issue they have been working on for years.”

International business has become ITEC’s main driver, with Coan saying that the company now does 75 percent of its work in Asia and the Middle East.

“Regardless of geopolitical challenges, we look for a developing environment so we can do our work,” he said.

He said the IAAPA show is a chance to determine how well the industry has done in the past year.

“IAAPA is a bell tower,” Coan said. “You can tell from those shows the sense of the health of the industry and where the cycle is.” 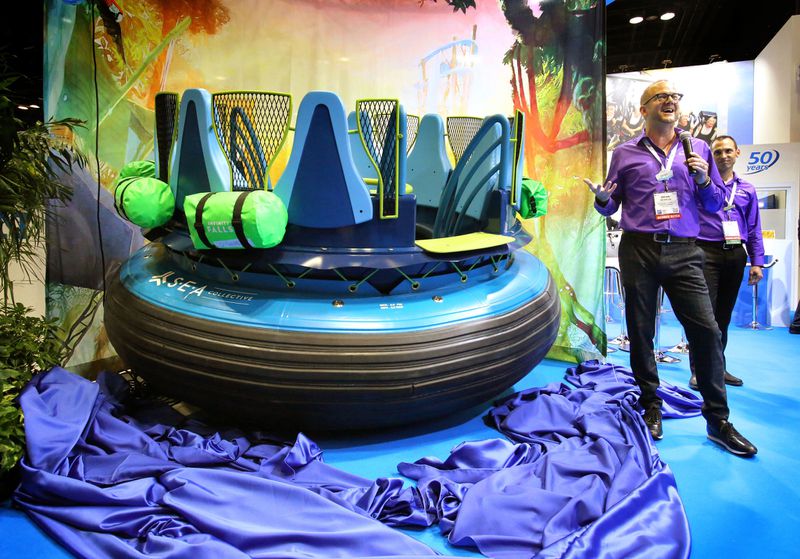