When Six Flags reopens post-pandemic, guests will need to book and pay in advance

After nearly two months of staying home, masking up for grocery store runs and watching in disbelief as the economy plummeted faster than a roller coaster, it would be nice to take a ride on a real one, wouldn’t it?

Theme parks, many of which have been closed since March, are beginning to map out their reopening strategies. On Monday, Disney’s Shanghai resort reopened to a sellout – albeit mandated low-capacity – crowd. A day later, Florida’s Universal Orlando announced that its City Walk promenade would reopen Thursday with screening measures in place.

And while Six Flags hasn’t yet shared any reopening dates in mind for its 26 North American parks, it is requiring visitors to make advanced reservations to limit capacity and allow for social distancing.

To that end, it announced its new reservation system Wednesday.

Guests will be able to book a reservation online at sixflags.com/reserve when the first of its parks reveals opening dates. Mark Kupferman, Six Flags’ vice president of insights and interactive marketing, says that visitors will need to schedule not only a day, but also a time. “We don’t want everyone to show up at 10 a.m.,” he notes, adding that a glut of people at the front gate would compromise social distancing.

“People used to be able to just buy a ticket and show up. Now it’s going to require a little more advanced planning and effort,” says Kupferman, acknowledging the new normal that the pandemic has created for nearly all aspects of life. “It’s not optimal, but it is absolutely going to be worth it for the guest. It’s about helping people feel good when they come to the parks so they can enjoy their day and not spend it worrying.”

Visitors will also need to prepay for parking using the new reservation system. By eliminating on-site transactions at the parking lots and ticket booths, Six Flags will be able to reduce up-close interactions between visitors and employees.

The chain is still working out the details of additional operational changes it will make to accommodate guests during the pandemic. But as with other parks and attractions, it’s likely to include strategies such as the addition of hand-sanitizing stations and the elimination of indoor theater shows and other presentations where large groups of people would gather.

Employees are likely to wipe down rides and other points of contact more frequently, and the parks will almost certainly utilize technology like mobile food ordering to reduce lines and curb the exchange of money and credit cards.

Despite all of the extra precautions and measures that parks and visitors will have to take for the foreseeable future, Bill Coan, president and CEO of the attraction consulting agency, ITEC Entertainment, feels confident that people will return to parks.

“It’s like ‘Jaws.’ Who is going to go in the water first?” he says. However, once the parks reopen, he believes that the pent-up demand will outstrip the supply.

Coan also believes that parks like Six Flags will need to do more than restrict the numbers of guests coming in the front gate and look at capacity management of individual venues situated within, such as restaurants, shops and even bathrooms throughout the property.

“You’ll see that immediately,” he predicts. “Parks will have to make people feel comfortable that they are safe.”

As with many industries, theme parks have quickly responded and adapted to the pandemic. Six Flags did that by scaling up its existing parking reservation system to be able to take advance park reservations.

“The coronavirus pandemic has caused us to push a lot of technologies we’ve already been working on to the forefront,” Kupferman says. “Over the next few months, we’ll be rolling out several programs. They will result in a better experience for everyone – both now and after the crisis has abated.”

How the reservation system works

Six Flags will have three tiers of guests that will be able to access reservations using its new system. The highest priority will be given to its upper-level Diamond and Diamond Elite members, people who pay monthly fees that give them unlimited visits to the parks and a range of additional, exclusive benefits.

Members at lower category levels and season pass holders will be able to scoop up the next batch of reservations, while single-day visitors will get the remaining ones.

Once guests choose the day and time they want to visit, they will be offered a short video to watch that will outline the parks’ COVID-19 policies and procedures about sanitization and social distancing.

Visitors will then be asked to affirm that they are not, to the best of their knowledge, sick and understand Six Flags’ health policy.

Wait, how can I reserve tickets when there’s no reopening date yet?

With 26 parks in North America, it’s likely that some will open before others and need to adhere to different state and local guidelines. But once opening dates are announced, Six Flags will make reservations available for the parks that are allowed to open and guests will be able to book reservations through the end of the year. 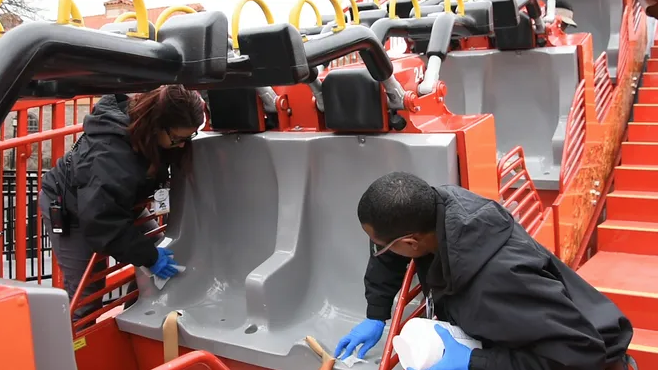