When will Disneyland and other parks reopen? How will they keep visitors safe?

A Disneyland fan since he was 5 years old, Ryan Temple visited the park up to twice a month before it closed because of the coronavirus outbreak, often wearing his favorite Mickey Mouse letterman jacket.

But now the 22-year-old Phoenix resident says he would be cautious about returning to the Anaheim theme park once it reopens — whenever that may be.

“I’m honestly not sure when I could feel safe enough to return to Disney,” he said. “The most obvious answer is once a vaccine is out, but that is almost certainly over a year away.”

Since the COVID-19 pandemic forced Disneyland and other theme parks to close in mid-March, park enthusiasts such as Temple have been asking themselves the same question: When will my favorite theme park reopen and under what circumstances?

After all, the amusement park experience is infamous for packing bodies tightly together in snaking lines and cramped ride vehicles. Parks increasingly use fingerprint readers at entrance gates and interactive touchscreen technology for ticketing, maps and restaurant ordering. And what about roller coaster grab bars and those turnstiles everyone pushes through to enter and exit?

The quick answer is that no one knows for sure, but industry experts have already been discussing what new procedures will be added to protect guests and workers from spreading the virus once that happens.

Swiss banking giant UBS told clients Monday that Walt Disney Co. is likely to wait until Jan. 1 to open its theme parks and predicted the Burbank media company will see only about 50% of 2019 attendance.

Moreover, we now believe the lingering effects of the outbreak — including crowd avoidance, new health precautions, etc. — will dramatically reduce the profitability of these businesses even after they are reopened until a vaccine is widely available,” the report said about Disney’s parks.

Stay-at-home orders by state and local governments will dictate when parks can consider reopening. Disney said its parks will remain closed until further notice. Universal Studios Hollywood and Universal Orlando Resort announced plans to stay closed until at least May 31.

Theme park operators have been tight-lipped about what the future holds for their parks, but they have clearly been discussing plans for opening day.

Annual passholders for Universal Orlando Resort said they received a survey last week asking how likely they are to return to the park under various restrictions, such as requiring guests to wear masks or limiting park attendance to 50% of normal.

In an interview with Barron’s, Disney Executive Chairman Bob Iger said his parks would require “more scrutiny, more restrictions” so customers would feel safe to return. He suggested the idea of taking the temperature of each visitor before allowing entrance.

“Just as we now do bag checks for everybody that goes into our parks, it could be that at some point we add a component of that that takes people’s temperatures, as a for-instance,” Iger said.

On several online Disney discussion forums, theme park fans say they have uncovered a plan, presumably leaked by a Disney employee, for allowing guests to return to the Walt Disney World Resort in Florida.

The plan, titled the Secure Circuit protocol, would reopen the park with limited capacity, no parades, no castle shows, no firework displays and health checks performed at every security checkpoint. In addition, the protocol would require guests to sign a form, clearing Disney of any liability for potential exposure to the novel coronavirus.

Disneyland representatives declined to discuss whether the Secure Circuit protocol is legitimate or any plans being developed to reopen the parks.

The process of taking temperatures of entering visitors (using non-contact thermometers) has already been adopted in theme parks in Asia that closed only briefly. At Janfunsun Fancy World in Taiwan, people who have a temperature of 99.5 degrees or higher are denied entry.

At Everland Resort in South Korea, workers take visitors’ temperatures and encourage them to wear masks.

The resort’s attraction queues include markings on the ground to show how far apart each person must stand to maintain social distancing. Rides and stores are disinfected hourly. Hand sanitizer dispensers are set up around the park.

Theme park insiders have been so focused on reopening after the crisis subsides that a webinar on strategies for reopening theme parks and other attractions drew nearly 500 industry workers this month.

The April 15 webinar was hosted by Gateway Ticketing Systems, a Pennsylvania company that develops ticketing systems and consults for theme parks, zoos, museums and other attractions.

“Everyone is just spinning out large contingency plans,” said Randy Josselyn, a principal at Gateway Ticketing who hosted the webinar.

Among the speakers on the webinar was Eddie Jones, a support specialist at Atlanta Botanical Garden, who said the garden has already devised a plan for reopening by allowing only 50 people to enter the gardens every 15 minutes.

The plan would cut capacity in the gardens from the normal daily attendance of about 7,000 to about 2,500, he said. A back gate would be opened so that guests could leave without creating a bottleneck at the entrance.

Industry experts say putting limits on capacity would almost certainly be a requirement so that people do not crowd together at reopened parks.

Bill Coan, chief executive of Itec Entertainment, a developer of theme park attractions and shows, said he doesn’t think capacity limits will be difficult to enforce because park fans will not be rushing back once the theme parks reopen.

“I don’t think those numbers are going to occur for some time,” he said of previous attendance numbers.

Coan echoed other theme park experts who said parks will probably open in stages, with some attractions closed in the early stages and rules imposed on how tightly packed visitors can be in lines and in stores.

Some parks might be able to get by with fewer workers if capacity is vastly reduced, and higher ticket prices might become a profit-bolstering option, but it’s difficult to know for sure because theme park operators aren’t talking.

“These are the kind of practical ideas that I imagine operators are working through, deciding what is practical,” he said.

Whatever procedures are adopted by theme parks, Lewison said some fans will stay away but many others will be ready to return quickly.

“There is a chunk of America who says, ‘Let’s take that risk.’” he said.

For Alexandria Grable, 19, who had an annual pass for the Disneyland Resort for the last three years, the closing of the resort in mid-March convinced her that the coronavirus outbreak was a serious health threat.

But the Santa Clarita teen said she would return if Disneyland reopens.

“I think I would go,” Grable said. “I trust Disneyland enough to know they would not put their guests in harm’s way.”

Other theme park devotees are less likely to rush back even if health and social distancing restrictions are added.

“Will anyone want to spin their teacup or the Roger Rabbit taxicab or Buzz Lightyear blasters, knowing how many other hands have touched them?” asked Matthew Gottula, a longtime Disneyland fan from Altadena, who said he doesn’t go anywhere without a container of hand sanitizer attached to his belt.

Another Disneyland fan, Aaron Goldberg, who has written several books on Disney parks and the Disney family, said he wouldn’t return to the parks without wearing a mask and gloves.

“Maybe I’m a bit more neurotic, but it’s impossible to avoid touching just about everything at Disneyland and all of the parks,” he said. 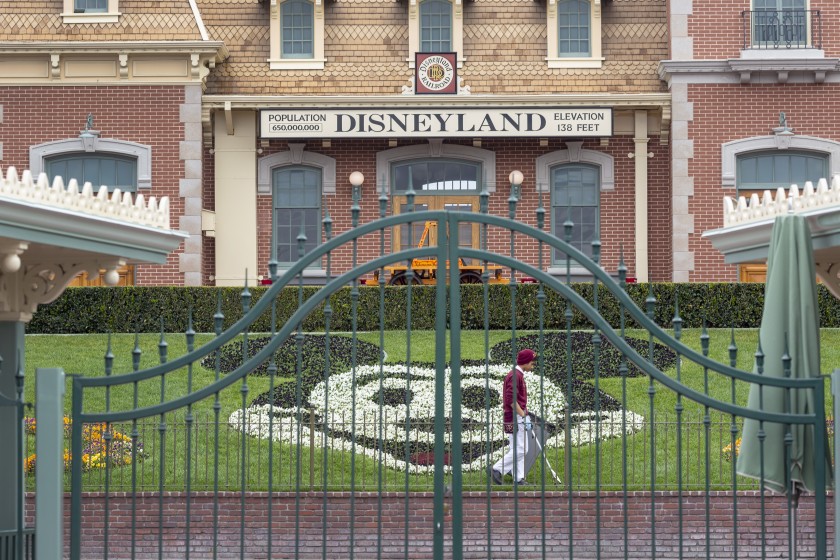