The world’s largest gamer theme park will be constructed in China, roughly the size of a Six Flags Amusement Park, developed by Orlando-based ITEC Entertainment.

As Forbes reports, ITEC Entertainment is designing the park attractions and engineering the new games on site. ITEC has not revealed which developer sought them out.

“I think where China can get ahead on that is on the gamer side, because Disney and Universal have not yet capitalized on that market,” said Bill Coan, President and CEO of ITEC Entertainment.

“We are telling the Chinese if you want to catch up quick in the theme park space, integrate it with gaming. China has the opportunity to try this first.”

‘China will be the pioneer in gamer-themed parks’

Coan said it will “be a big science project”. He added: “There is nothing we can model this around. Some of the park will be conventional with roller coasters, but a lot of this will be new, and require innovative technology and presentations we haven’t done before.”

The park, slated to open in 2022, may include an esports arena where people compete daily in popular Chinese video games.

International and local game publishers will have the opportunity to license their IPs.

“We are pretty close to the business, and we haven’t heard of anyone designing a park with gaming as a primary focus in the US. Not yet anyway,” Coan said.

“Hopefully we can get this project done sooner rather than later. If we do, China will be the pioneer in gamer-themed amusement parks,” he added.

Tencent and the growth of esports

Esports is a rapidly growing industry, set to challenge NFL with a predicted 300 million viewers by 2022.

The first purpose-built esports arena was recently announced for the US and top gaming group Tencent is increasing its investment in esports tournaments in China.

Tencent and Super Generation Investment are also planning an AI ‘future town’ in Minhang, described as the first “all-in-one professional esports industrial park” in China and set to open in 2020.

Blooloop spoke to industry experts Professor Andy Miah and Brian Mirakian about the growth of esports and what this will mean for the visitor experience. 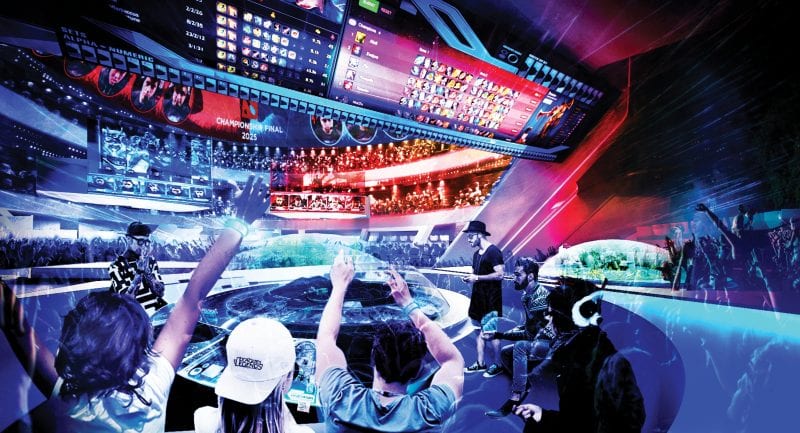